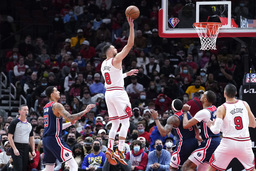 As NBA teams approach the midway point of the schedule, the Chicago Bulls lead the Brooklyn Nets by 2 1/2 games atop the Eastern Conference standings.

While both clubs -- not to mention the rest of the East -- realize that perch means something only at the end of the regular season, Wednesday's clash between the Bulls and visiting Nets carries cachet nonetheless.

"We've got to play disciplined basketball without fouling, help each other out rebounding, getting out and running," the Nets' Kevin Durant said. "We can't shoot ourselves in the foot."

Durant helped keep Brooklyn afloat with a double-double of 28 points and 10 rebounds against host Portland on Monday, but the Nets were unable to prevail, falling 114-108 for their fifth loss in seven games.

Brooklyn was without James Harden, who is questionable for Wednesday's game with a hyperextended left knee.

As with Chicago, Brooklyn is in the midst of a four-games-in-six-nights crunch. Nets coach Steve Nash said that while Harden likely would be available against the Bulls, Brooklyn would continue to be cautious.

"I think it's really important for us to take it day-by-day right now," Nash said. "I know that's a cliche, but I think that is the smartest way to approach this."

The Bulls are seeking a sweep of the season series, routing the Nets by 23 in Chicago on Nov. 8 before edging them by four on the road on Dec. 4.

Zach LaVine and DeMar DeRozan combined to score 35 second-half points to help the Bulls overcome an 11-point deficit in Brooklyn. Durant (28 points, 10 rebounds) and Harden (14 points, 14 assists) both posted double-doubles for the Nets.

Point guard Kyrie Irving, who recently returned to the Nets, did not play in either of the first two meetings with the Bulls. Irving, who chooses not to be vaccinated against COVID-19, is unable to play in New York City due to its vaccine mandate, but can play on the road. He has scored 22 points in each of his first two contests this season.

"To be the best in this league, you've got to compete against the best," DeRozan said. "(Wednesday) is going to be one of those fun games. I'm pretty sure they're going to come in here with some type of revenge, especially having Kyrie back."

Chicago routed the visiting Detroit Pistons 133-87 on Tuesday, as eight Bulls scored in double figures. Nikola Vucevic scored 16 of his game-high 22 points in the third quarter, while DeRozan registered a double-double with 20 points and 12 rebounds.

The Bulls notched their most lopsided win against the Pistons in the history of the rivals' 272-game series history. Chicago matched a season high for points and made 3-pointers (18) en route to its 10th win in 11 games.

The blowout helped Bulls coach Billy Donovan keep many players fresh. Of the Chicago quartet of Lonzo Ball, DeRozan, LaVine and Vucevic, LaVine logged the most minutes at 29:05.