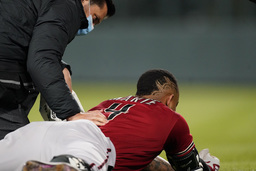 DENVER (AP) Infielder Ketel Marte was placed on the 10-day injured list by the Arizona Diamondbacks on Thursday, a day after hurting his right hamstring against the Colorado Rockies.

Arizona recalled Andrew Young, who had been with its taxi squad, ahead of Thursday's game at Coors Field.

Marte was injured in the sixth inning of the Diamondbacks' 8-0 loss. He grabbed the back of his right hamstring while running to first base after hitting a grounder to third and had to be helped off the field.

Manager Torey Lovullo says Marte likely will get an MRI when the team returns home.

"There's some soreness there; there are some things that we expected," Lovullo said.