Pirates 3B Hayes looking to build off breakout 2020 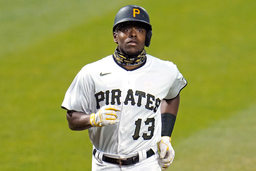 His ability to handle his business at third base was never in doubt. Winning three Gold Gloves in the minors offered all the proof required. Yet there were still questions - at least externally - about how the Pittsburgh Pirates' top prospect would adjust at the plate after middling numbers at best during his rise through the team's farm system.

Hayes answered all of them during a blistering September, hitting .376 with five home runs, three triples and 17 doubles on his way to a sixth-place finish in NL Rookie of the Year voting. His .682 slugging percentage was more than 200 points higher than his best year in the minors.

Not last fall. Hayes collected at least one hit in 20 of his 24 appearances and ended the season with an eight-game hitting streak, his play one of the few highlights as the Pirates finished with the worst record in the major leagues.

Hayes spent the offseason working on his form, trying to get ready for the adjustments from opponents he knows is coming to come. He also finds himself as the best candidate to become the de facto face of the franchise following the departures of Josh Bell and Jameson Taillon among others.

It's a role Hayes understands has basically fallen into his lap. That doesn't mean he's going to spend a lot of time worrying about it. He's been low-key since his starting joining his father - 13-year major league veteran and 1996 World Series champion Charlie Hayes - on the diamond. He's happy to be considered a leader. Just don't expect him to undergo a personality makeover to accomplish it.

Still, Hayes admits he's suddenly gone from one of the young guys to one of the more established faces in the clubhouse in a year. The Pirates are undergoing a top to bottom makeover. His spot at third base is one of the few places on the roster where there are no long-term questions.

As difficult as the short-term might be, Hayes expressed confidence in the big picture. General manager Ben Cherington is doing his best to stockpile talent in the minors. Hayes figures it's his job to help create the culture in the clubhouse that will help lead Pittsburgh back to respectability.

"Once we add guys and we have younger guys in the system that are really good and once we get all that together and the chemistry is good I think we're going to be really good," Hayes said.

Hayes might already be there, though he is ready for the pitchers that he punched frequently last year to start punching back. That's the game.

"There's gonna be a lot of ups, a lot of downs but I'm looking forward to it," Hayes said. "I mean I only played like 3-4 teams so I'll get to play a bunch of teams across the league, so I'm excited for that. And yeah, I feel like I still have a lot to prove."