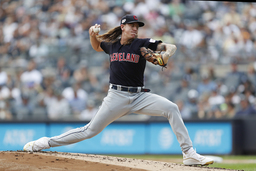 CLEVELAND (AP) The Indians are already dealing with adversity before taking the field for their first full-squad workout.

Starter Mike Clevinger could be sidelined two months after undergoing surgery Friday to repair a torn meniscus in his left knee, an injury the right-hander sustained while working out at the team's training complex in Goodyear, Arizona, earlier this week.

"He was doing some drills a couple days ago," manager Terry Francona said before Clevinger had the procedure. "He felt something. We took him to the training room. Then we let him go home to see how he feels. I think our trainers were a little nervous at the outset that this has meniscus written all over it. He was pretty sore so they got him an MRI."

The Indians estimate Clevinger will be able to return to "major league game activity" in 6 to 8 weeks. Cleveland opens the season on March 26 against Detroit.

If there's a bright spot, it's that the injury happened early in camp and not closer to the season's start.

"It's not doomsday," Francona said. "One, we know he's a quick healer. And two, he will be able to keep his arm in condition the entire time. I'd prefer it didn't happen, but he's going to be OK."

Cleveland also agreed to a one-year contract with outfielder Domingo Santana that guarantees $1.75 million. The deal includes a $1.5 million salary this year and a $5 million club option for 2021 with a $250,000 buyout, and it could be worth $7.5 million over two years.

Clevinger went 13-4 last season and the Indians are counting on him to help fill some of the void after they traded two-time Cy Young winner Corey Kluber to the Texas Rangers this winter.

The 29-year-old Clevinger has become a vital part of the team's rotation, winning 38 games over the past three seasons. He made 21 starts in 2019, but missed time early in the year with a strained back muscle. Clevinger had a 2.71 ERA last season.

Clevinger avoided arbitration by signing a $4.1 million contract for this season. He's recently been outspoken about the Houston Astros' sign-stealing scandal.

Santana played for Seattle last season, batting .253 with 21 homers and 69 RBIs in 121 games. The 27-year-old Santana missed 24 games in August and September with an injured right elbow.

He'll enter a crowded competition to win one of the open starting spots in Cleveland's outfield. Only center fielder Oscar Mercado seems to have a job locked up.

"It's an offensive bat with right-handed power that isn't easy to find," Francona said of Santana. "Where it ends up fitting, we don't know all of that yet. With (Franmil) Reyes, with (Jordan) Luplow, with Domingo, it's enough of a bat, a pretty potent bat at times. We thought it was worth signing him. We don't know where it all fits together but we'll figure that out."

Santana is excited about the new opportunity.

"This is a great organization. I'm really glad that I'm part of it," he said. "They didn't talk to me about how I would fit here. They really just talked to my agent so I don't know that part yet. I'm just glad I'm here. I'm comfortable with which ever role they put me in. I just want to prepare myself and be healthy."